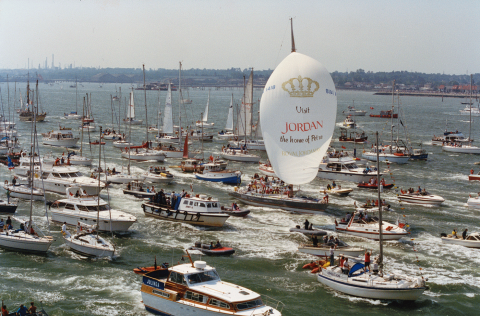 One of my favorite films at Tribeca 2019.

The Whitbread Around the World Sailing Race (WRTWR) began in 1973, and was originally sponsored by a brewery in Britain that grew into a hotel chain.  The race is held every three years, and is now known as the Volvo Ocean Race.

When Tracy Edwards was 10 years old, her father died from a cardiac arrest.  When she was 16, she found herself escaping an alcoholic stepfather, dropping out of school, and heading to the Greek Islands.  Leaving everything behind, she found freedom in sailing. Although the all male crew was hesitant to hire a female, she landed a job as a cook on board a yacht that was competing in the Whitbread Challenge.  When she managed to get away from cooking and cleaning, she learned as much as she could above deck.

Wanting to sail around the world again, Tracy was determined to form the first all female sailing crew and compete in the 1989/90 Whitbread Race with 9 women. Her idea was met by many obstacles, however. Firstly, funding the adventure was looking bleak as no one would take the women seriously thinking women did not have the stamina that was required. Secondly, personality conflicts among the female crew were a growing concern, and lastly, repairing their extremely dilapidated boat, seemed hopeless.

Over 3 months at sea, 30 foot waves, and the dangerous Southern Ocean crossing, the film takes you through each leg of the race:

You are currently reading “Maiden” at One World Cinema.