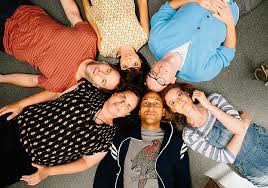 This is a fascinating film from a psychosocial standpoint. Take a group of comedic improv actors known as “The Commune.” They have all worked together for over a decade.  Not only are they quick-witted with each other’s responses on stage, but they are also emotionally supportive of each other’s needs off stage as well. That is, until their theater is going to close down and a talent scout comes to observe them. Two walk away with auditions to a very well-known TV Comedy show.  Out of those two, one lands the job, and the other has to face her inner insecurities disallowing her to go on the audition. It is at this point when the group as a whole, no longer ‘has each other’s backs.’ There is jealousy, envy, and deceit. The teacher of the one who landed the TV gig, gets very upset because he taught him everything he knew, and outrage as the one who landed the TV gig, stole one of his friend’s jokes and used it on air. Some of the troupe’s relationships are falling apart, while others are getting closer together due a family member in crisis. Feelings of betrayal, success, insecurities, priorities, love, failure, support, non-support, and jealousy all resonate when everyone doesn’t make it to the top. The one’s on top are feeling the pressure, while other’s find their meaning to success in different ways.  Fascinating.

You are currently reading “Don’t Think Twice” at One World Cinema.